Lava from an erupting volcano on Spain’s La Palma island has reached the Atlantic Ocean, raising fears of toxic gases being released and explosions.

Clouds of white steam were seen rising as a red-hot current made contact with the water in the Playa Nueva area.

This could trigger a chemical reaction that can irritate the skin and eyes and affect breathing.

Hundreds of homes have been destroyed since the Cumbre Vieja volcano in the Canary Islands erupted on 19 September.

About 6,000 people have been evacuated, as the lava was engulfing houses, schools and some banana plantations.

Scientists have warned of breathing difficulties and irritation to eyes and skin due to the chemical reaction caused by the lava from the Cumbre Vieja volcano reaching the sea.

Along with warnings of toxic hydrochloric acid vapour being released into the atmosphere, officials in the Playa Nueva area also said there could be explosions. 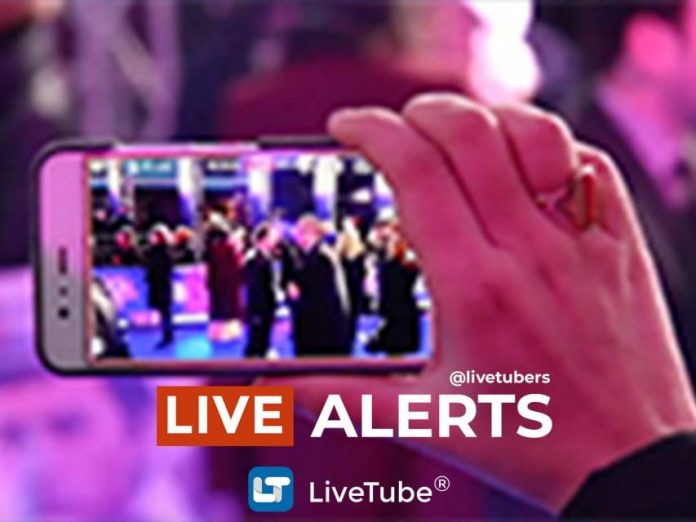 Nevada inmate fighting execution seeks firing-squad option
*** With material from Channel News Asia ***
————————————————
🔴 Are you on the scene or can you provide more information? Do you want to report the news?
Send us a live stream and get paid.
👉 Download the free LiveTube App

✅ More info:
How to become a paid reporter

Soccer-Newcastle stun Leicester to all but ensure safety

Callum Wilson’s double helped Newcastle United to a thumping 4-2 win away to Leicester City on Friday which all but secured their Premier League survival and left the hosts looking over their shoulders in the race for a top-four finish.
*** With material from Channel News Asia. 👉 Read More***
————————————————
🔴 Are you on the scene or can you provide more information? Do you want to report the news?
Send us a live stream and get paid.
👉 Download the free LiveTube App


✅ More info:
How to become a paid reporter

Video goes viral: Desperate message to the Malaysian government on their handling of the Covid crisis

We have received the video below of a man sending a desperate message to the Malaysian government on their handling of the Covid crisis. The man says that he himself caught the Covid virus.
This is a comment and opinion of one person, and on LiveTube, we are usually not publishing opinions or talking heads. But after careful review, our editorial team decided that this particular piece provides some interesting insights into what the people in Malaysia are facing and dealing with. Please see this as a pure piece of insight as we did not fact-check or verify all the claims from the man’s comments.

Video: Stockholm arena renamed in tribute to Avicii
(Send us your story. Go LIVE from the LiveTube App and get paid.)

Source: Reuters News Agency via feed
———————-
🔴 On the scene? More info?
Send us your news report. GO LIVE and get paid.
✅ How to become a paid reporter

The Russian military cargo plane flew us almost to the top of the world, to an archipelago once best known for its rare bird species and its walruses.

Now Franz Josef Land is home to a Russian military base and the source of added tension in relations with the West.

The US again has once again accused Moscow of “militarising” the Arctic and the head of Russia’s Northern Fleet has told the BBC that Nato and US military activity in the region was “definitely” provocative and on a scale not seen since World War Two.

We were among the first foreign journalists taken to visit the facility on Alexandra Island, over two hours’ flight from Murmansk up over the Arctic.

The airfield has been upgraded to allow all kinds of planes to land all year round, though emerging on to the tarmac was like stepping on an ice rink.

Less than 960km (600 miles) below the North Pole, conditions are extreme, with deep snowdrifts and blizzards even in mid-May. For a while, rattling along in military trucks, I could make out nothing but white through the window.

In deepest winter the temperature drops to minus 50 degrees C and the soldiers occasionally have to head out in their vehicles to disperse the polar bears who amble right up to the base.

Even so, Russia has made boosting its presence in this region a priority.

Even the structure of the base is meant to make a statement: it’s painted in the colours of the Russian flag, bright against the blank canvas all around.

Known as Arctic Trefoil for its three-leaved shape, the base is the second of its kind in the Arctic – this one is meant for 150 soldiers.

Ahead of a tour, the commander in charge said it was so high-tech and ecologically efficient it was “like a space station, just in the Arctic emptiness instead of in orbit”.

But the main show is outside, where Bastion missile launchers raise and lower their firing mechanisms as a soldier in white camouflage stands guard, gun across his chest.

The missile systems are “to destroy enemy ships,” another soldier said. They are, he said, “effective”.

Such posturing is making the United States and Nato wary as Russia’s military presence in the region expands to a level not seen since the Cold War.

Nato’s spokeswoman confirmed that the alliance had stepped up its patrols and exercises, in response, she said, to a “more challenging security environment”.

Before we were flown to the archipelago, we were bussed to a battleship moored in the closed military town of Severomorsk. At 252 metres long, the nuclear-powered Peter the Great is the giant grey flagship of the Northern Fleet.

On board, the Fleet’s commander, Adm Alexander Moiseyev, addressed us in front of a portrait of Peter I, the Tsar who founded Russia’s navy and turned the country towards the West.

But he accused Nato forces and the US of military actions in the Arctic that increased the risk of conflict.

“There haven’t been so many of their forces here for years. Decades. Not since World War Two,” Adm Moiseyev countered, when I put it to him that Nato blamed Russia for the surge in tension. “We see such activity as provocative so close to the Russian border where we have very important assets. By that, I mean nuclear forces.”

As for the Russian build-up, the troops are returning to a region Russia abandoned in the 1990s when the Soviet Union fell apart.

“We’re just recreating the capacity to protect our borders, not to threaten anyone,” argues Lev Voronkov, an Arctic expert from MGIMO university. “After the USSR collapsed, even border posts in that region were left unmanned.”

That won’t be an option for much longer. As the polar ice melts, removing a protective natural curtain, Russia’s long northern frontier will become vulnerable.

As the Bastion missile launchers danced for the cameras on Alexandra Is
land, I spotted a Russian ice-breaker cutting through the frozen landscape in the distance. A smaller cargo ship followed in its wake and an iceberg loomed behind both of them.

The vessels were crawling along the northern shipping route that skirts the archipelago and that Russia hopes to develop and control as global warming makes it easier to navigate. Trade would include exports of the large oil and gas reserves beneath the sea here.

Admiral Moiseyev calls his troops the “main instrument” for protecting those economic interests, as well as Russia’s borders.

As competition begins to heat up, our visit to Franz Josef Land was a chance for Russia to flex some muscle and send a message: that its ambitions for the Arctic are great and growing and they are interests it’s ready to defend.

GAZA: A senior Hamas official predicted a ceasefire within days even as Israel and Gaza militants pursued their cross-border attacks into an 11th day on Thursday (May 20), with Israeli warplanes carrying out new air strikes and Palestinians firing more rockets.
United States President Joe Biden …
*** With material from Channel News Asia. 👉 Read More***
———————-
🔴 On the scene? More info?
Send us your news report. GO LIVE and get paid.
✅ How to become a paid reporter

India’s biggest airline IndiGo said on Friday it had selected jet engine manufacturer CFM International’s LEAP-1A engines to power its fleet of 310 new Airbus aircraft.
*** With material from Channel News Asia. 👉 Read More***
———————-
🔴 On the scene? More info?
Send us your news report. GO LIVE and get paid.
✅ How to become a paid reporter

VIDEO: Fears of torture in Belarus jail as girlfriend of dissident Protasevich filmed confessing to crimes

Video: Fears of torture in Belarus jail as girlfriend of dissident Protasevich filmed confessing to crimes
(Send us your story. Go LIVE from the LiveTube App and get paid.)